In 1976, legalized casino gaming was approved by the citizens of New Jersey as a unique tool of urban redevelopment for Atlantic City.

In 1977, the New Jersey Casino Control Act (the “Act”) was signed into law. It declared that the rehabilitation and redevelopment of existing tourist and convention facilities in Atlantic City, and the fostering and encouragement of new construction and the replacement of lost convention, tourist, entertainment and cultural centers in Atlantic City, will offer a unique opportunity to make maximum use of the natural resources available in Atlantic City for the expansion and encouragement of New Jersey's hospitality industry, and to that end, the restoration of Atlantic City as the Playground of the World and the major hospitality center of the Eastern United States.

The Act further declared that restricting the issuance of casino licenses to major hotel and convention facilities is designed to assure that the existing nature and tone of the hospitality industry in New Jersey and in Atlantic City is preserved, and that the casino rooms are always offered and maintained as an integral element of such hospitality facilities, rather than as the industry unto themselves that they have become in other jurisdictions.

The Act is designed to engender and maintain public confidence and trust in the regulation of the licensed enterprises, to provide an effective method of rebuilding and redeveloping existing facilities and of encouraging new capital investment in Atlantic City, and to provide a meaningful and permanent contribution to the economic viability of the resort, convention, and tourist industry of New Jersey. (Excerpted from the Casino Control Act, N.J.S.A. 5:12-1.) 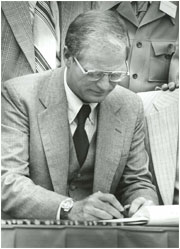 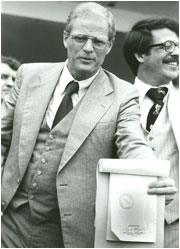 Governor Byrne presents the newly signed Casino Control Act. To his left is Assemblyman Steven P. Perskie, who in 1990 would become the third chairman of the Casino Control Commission.