NJ Office of the State Comptroller

During the audit period, Surgical Sock received $1,371,640 in Medicaid payments from 7,901 claims. From this universe, MFD statistically selected a sample of 135 claims totaling $27,136 paid to Surgical Sock. MFD determined that in 52 of the 135 sample claims, totaling $4,607 in reimbursement, Surgical Sock failed to comply with state and federal regulations or MCO policy. Specifically, MFD found that Surgical Sock violated N.J.A.C. 10:49-9.8 by failing to disclose fully the services provided, and/or by inaccurately billing Healthcare Common Procedure Coding System (HCPCS)/Current Procedural Terminology (CPT) codes. The identified overpayments include claims that were not supported adequately by prescribing practitioner (physician) orders or customer invoices, as well as claims that were upcoded and inappropriately billed.[1]  These issues extended across every category of DME and related medical supplies reviewed.

For purposes of ascertaining a final recovery amount, MFD extrapolated the error rate for claims that failed to comply with state and federal regulations or MCO policy to the total population of claims from which the sample claims were drawn, which in this case was 7,901 claims with a total payment of $1,371,640. By extrapolating the dollars in error over the entire universe, MFD calculated that Surgical Sock improperly received an overpayment of $242,873 that it must repay to the Medicaid program.

The New Jersey Department of Human Services, Division of Medical Assistance and Health Services (DMAHS) contracts with five MCOs to administer the provision of health care services to Medicaid recipients in New Jersey. That contract requires MCOs and their network providers to adhere to applicable state and federal laws and regulations. UnitedHealthcare (UHC) is one of five MCOs under contract with the state and the MCO through which Surgical Sock submitted the vast majority of its Medicaid claims for the audit period (97 percent). Surgical Sock, as a provider within the UHC MCO network, must comply with state and federal laws and regulations, including the provider certification and recordkeeping requirements set forth in N.J.A.C. 10:49-1.1 et seq. and 10:49-9.8, as well as guidelines established by any MCO with which it contracts (in this case UHC). According to N.J.A.C. 10:49-9.8, providers must “keep such records as are necessary to disclose fully the extent of services provided.” DME providers, at a minimum, must maintain a legible, dated prescription for a DME item that is signed by the prescribing practitioner and references the item prescribed. See N.J.A.C. 10:59-1.5 and UHC Coverage Determination Guideline for durable medical equipment, orthotics, ostomy supplies, medical supplies and repairs/replacements (UHC Policy).

DME is defined by N.J.A.C. 10:59-1.2 as “an item or apparatus, other than hearing aids and certain prosthetic and orthotic devices . . . which . . . is primarily and customarily prescribed to serve a medical purpose and is medically necessary . . . is generally not useful to a beneficiary in the absence of a disease, illness, injury or disability and is capable of withstanding repeated use . . . .”

According to N.J.A.C. 10:59-1.5(a), DME requires a legible, dated prescription or a Certificate of Medical Necessity personally signed by the prescribing practitioner. Similarly, pursuant to UHC policy, DME and orthotics are deemed medically necessary when (i) ordered by a physician, (ii) the item meets UHC’s medical necessity definition, (iii) the item is consistent with the state definition of DME or orthotics, and (iv) the item meets the criteria for DME Medicare Administrative Contracts established by the Centers for Medicare and Medicaid Services (CMS).

During the audit period, Surgical Sock received $1,371,640 in Medicaid payments from 7,901 claims. Surgical Sock’s claims were broken down into two categories, compression stockings and other items/services such as breast pumps, walking boots, supportive devices, blood pressure monitors, enuresis alarms, respiratory devices, and orthotics management and training (collectively referred to as “Miscellaneous”). See Table I for a breakdown of Surgical Sock’s claims by category description, dollar amount, number of claims, and percentage of dollars associated with each category of claims.

See Graph I below for a representation of the sample error rate for each claim category and the total dollar amount of Medicaid program funds paid to Surgical Sock for each category. 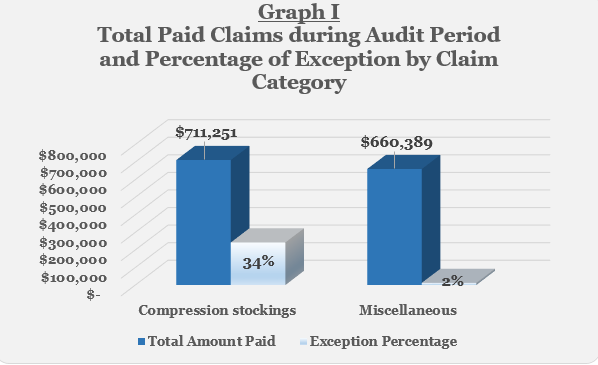 The objective of the audit was to evaluate whether claims submitted by and paid to Surgical Sock complied with Medicaid requirements under applicable state and federal laws and regulations as well as MCO policies.

To achieve the audit objective, MFD’s methodology consisted of the following:

MFD reviewed 135 Medicaid claims submitted by Surgical Sock between January 1, 2014 and December 31, 2018. The 135 paid claims covered DME and medical supplies, including compression stockings and other miscellaneous items and services, such as breast pumps, walking boots, supportive devices, blood pressure monitors, enuresis alarms, respiratory devices, and orthotics management and training. MFD determined that for 52 of the 135 paid claims, totaling $4,607 out of $27,136 paid claims sampled, Surgical Sock violated N.J.A.C. 10:49-9.8 by not fully disclosing the services provided, and/or by inaccurately billing HCPCS/CPT codes. See Table II for a breakdown of exceptions (claims that failed to meet the audit criteria) by claim category and Attachment I for an individual sample claim breakdown by exception.

MFD reviewed 57 claims for compression stockings. These claims include HCPCS codes A6530, A6531, A6537, A6539 and A6540. The different HCPCS codes denote various compression grades (or levels) and stocking lengths (i.e., waist, thigh, or knee length). The vast majority (95 percent) of the claims in the sample were for A6539 and A6540, waist-length compression stockings. MFD found that 41 of 57 such claims reviewed violated N.J.A.C. 10:49-9.8, which requires that claims must be true, accurate, and complete and that the records supporting such claims must disclose fully the extent of services provided. These compression stockings exceptions total $4,340 out of $12,734 paid claims sampled, which is a 34 percent error rate in terms of the sample dollars paid. See Table III for a breakdown of compression stocking exceptions by reason, number of claims, and associated dollar values.

In addition, MFD found that Surgical Sock improperly billed seven claims because the ordering physician could not be identified or the prescriptions lacked a date, diagnosis, recipient name, physician signature, or a description of the item prescribed. At a minimum, these elements must be included to ensure that each physician’s order is legitimate, meets the medical needs of the recipient, corresponds to the claim billed, and meets the record keeping requirement set forth in N.J.A.C. 10:49-9.8.

As an example of one of the seven invalid prescriptions, Surgical Sock provided a prescription to support billing procedure code A6539. The prescription, dated April 28, 2014, noted four compression stockings without a specified length or compression grade. While the prescription included a signature, MFD could not ascertain the identity of the individual who signed it because the prescription form did not include a physician’s name, National Provider Identification number or license number, any of which could have been used to determine who prescribed the products. See Attachment IV. Because MFD could not ascertain who prescribed the stockings and whether the prescriber had authority to prescribe the stockings, MFD found this claim deficient.

Furthermore, MFD determined that two claims for compression stockings were deficient because Surgical Sock lacked any evidence of a physician order for the compression stockings. Pursuant to the relevant UHC policy, which mimics N.J.A.C. 10:59-1.5(a), DME, related supplies, and orthotics are eligible for reimbursement only when ordered by a prescribing practitioner.

MFD also identified one instance in which a claim had a valid prescription, but Surgical Sock lacked a customer invoice indicating that the customer actually received the prescribed item. MFD found this claim deficient because MFD could not verify that the beneficiary received the product. 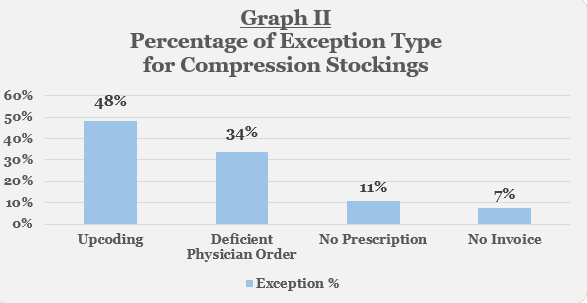 In addition to the compression stocking category, MFD reviewed 78 claims for miscellaneous items and services, comprised of breast pumps, walking boots, supportive devices, blood pressure monitors, enuresis alarms, respiratory devices, and orthotics management and training. MFD found that 11 of these 78 sampled claims violated N.J.A.C. 10:49-9.8. These claims total $267 out of $14,402 in total sample claim dollars for these items. See Table IV for a breakdown by exception.

Finally, for the remaining three exceptions, MFD determined that these claims lacked adequate prescriptions. See Graph III below for the error rates for each exception type for the miscellaneous category. 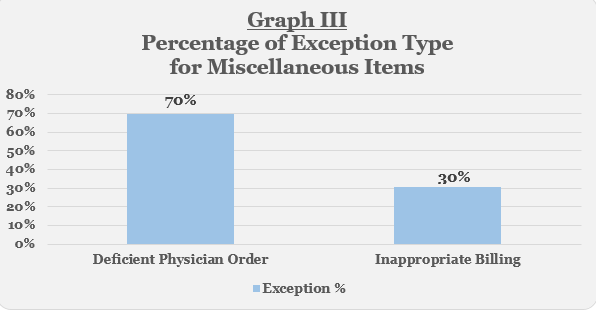 MFD determined that for the period January 1, 2014 through December 31, 2018, Surgical Sock improperly billed and received payment for 52 of the 135 sampled claims totaling $4,607. For purposes of ascertaining a recovery amount, MFD extrapolated the error rate for claims that failed to comply with state and federal regulations or MCO policy to the total population of claims from which the sample claims were drawn, which in this case was 7,901 claims with a total amount of payment of $1,371,640. By extrapolating the dollars in error over the entire universe, MFD calculated that Surgical Sock received an overpayment of $242,873 that it must repay to the Medicaid program.

After receipt of MFD’s Draft Audit Report, Surgical Sock, through counsel, submitted a written response and Corrective Action Plan (See Appendix A). In this response, Surgical Sock objected to MFD’s audit findings and stated that it reserved the right to challenge MFD’s sampling and extrapolation methodologies. MFD addressed each argument raised by Surgical Sock in a document entitled “Surgical Sock’s Comments and MFD’s Response” (See Appendix B).

Thank you for your attention to this matter.

Enclosures can be found in the PDF version at the top of this page:

[1] “Upcoding” occurs when a healthcare provider improperly bills a higher code than the code that should have been billed for the good provided or procedure performed.