Funding Will Provide Access to High-Quality Pre-K Education for More Than 2,000 Children

TRENTON – Governor Phil Murphy today announced the first round of new Preschool Education Expansion Aid (PEEA) of $20.6 million to 31 eligible districts, which will enhance and expand preschool education programs for more than 2,000 three and four-year-old children across the state. A critical part of creating a stronger and fairer New Jersey, this expansion was made possible due to Governor Murphy's Fiscal Year 2019 budget, which included $50 million for PEEA and an additional $33 million in Preschool Education Aid. This is the largest increase in pre-K funding in over a decade. The distribution of preschool expansion aid will be divided into two rounds, with New Jersey Department of Education (NJDOE) expected to award the second round of PEEA in early October.

“By investing in early childhood education, we are making a long-term investment in the next generation,” said Governor Murphy. “Every child deserves the opportunity to have access to quality pre-K programs and this funding will provide our children with the tools and support they need to reach their greatest potential. “

“Providing our youngest learners with high-quality early education will have long-lasting benefits for children, and for communities as a whole,” said Education Commissioner Lamont O. Repollet. “We’ve learned that an investment in preschool – or, more accurately, an investment in high-quality preschool – has the potential to help children succeed in school, and later in life, by providing them with the academic and social skills needed for school readiness.”

“We know that high quality pre-K programs are the single best head start we can give to help children reach their fullest academic potential,” said Senate President Stephen Sweeney. “New Jersey’s programs have gained national attention and respect. The continued expansion is a reflection of our continued commitment to providing early childhood education to more young students in more communities across the state.”

“All the research shows that pre-K is one of the best investments we can make in our children academically and in our state’s economic future,” said Senator Joe Vitale. “This early start in the educational experience of young students helps to provide them with the skills and knowledge needed to succeed in a rapidly-evolving world. Quality preschool programs result in long-term gains for students in school and also later in life.”

“The benefits of a preschool education are significant and they are benefits all children should have access to. That is why we made sure that the state budget included the funds needed to for the expansion of preschool in the state,” said Assembly Speaker Craig Coughlin. “We recognize the importance of building a solid foundation that sets up students for academic success. This is an investment on the future of our students that will pay dividends for New Jersey.”

“The remarkable benefits of a high-quality preschool education cannot be debated,” said Assemblywoman Yvonne Lopez. “The lessons taught in preschool set children on a path to success academically. I applaud the Department of Education’s efforts towards preschool expansion and I am excited for the education opportunities that will now be available for the young students of the State of New Jersey.”

“We know that for every dollar we invest in early childhood education, we save $7 in tax payer money down the line,” said Senator Teresa Ruiz, the chair of the Senate Education Committee. “This announcement made by Governor Murphy secures the funding promised by the governor and the Legislature to expand early childhood education, an investment in our children and our state. I applaud the Governor and his administration for dedicating this funding, and moving us towards a New Jersey that has high quality preschool programs for its earliest learners.”

“Children who go to preschool are better prepared for kindergarten. Getting children on the right track early gives them a head start academically and helps instill a love of learning,” said Assemblywoman Pamela Lampitt, the chair of the Assembly Education Committee. “We should afford our students every advantage that can help them in their educational journey, and augments their chances of success

PEEA funding is distributed based on the numbers of low-income students in the district. This funding will support existing preschool programs to provide high-quality programming by extending the hours, decreasing class size, and adding additional children. The districts will improve seats for 1,218 preschool children and will open new seats for 882 new preschool children.

Research over the past several decades has consistently shown that children who attend high-quality early childhood education programs are less likely to be placed in special education, less likely to be retained in a grade, and more likely to graduate from high school than peers who didn’t attend such programs.

For the first round of PEEA, NJDOE targeted districts that have previously received partial State aid and could implement expansion plans by October 2018. The second round of funding will target districts with a Free and Reduced Lunch percentage above 20 percent that have not previously received any State preschool aid. NJDOE received 31 applications from 117 eligible school districts and is currently reviewing those applications. The total request for round two funding is over $26.7 million. This level of funding would allow up to 239 half-day children and 2,000 full-day children to be served for the first time with State preschool aid.

Districts that were recently awarded round 1 PEEA funding include: 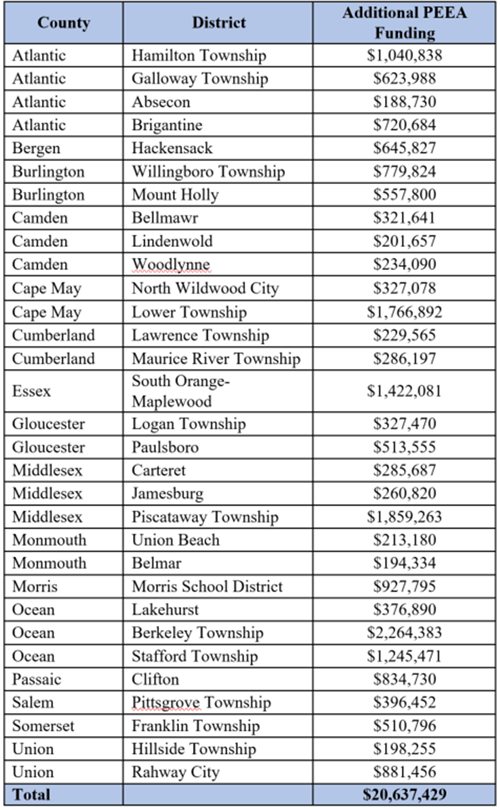