“Today, we are backing up our words with action by signing five important pieces of legislation for our service women and men,” said Acting Governor Sheila Oliver, who serves as Commissioner of the Department of Community Affairs. “From expanding veterans’ property tax deductions to directing the provision of free legal services for veterans at risk of becoming homeless, these new laws put New Jersey on the right path for supporting those who have served our country.”

The following bills were signed into law:

The legislation signed addresses a range of services including from providing property tax relief to honoring the 100th Anniversary of the American Legion. Another bill directs the Adjutant General to work with legal service organizations, to provide combat veteran homelessness.

“New Jersey is committed to ensuring that we honor our brave men and women for their service, not just in words, but through action,” said New Jersey Adjutant General Jemal Beale. “I thank the Acting Governor for signing this important legislation to support our veterans who have sacrificed so much for this nation.”
Regarding S1331:

“To serve our country is to commit your life to our national values, freedoms and safety, no matter the cost,” said Senator Vin Gopal. “This courageous and selfless act deserves to be acknowledged at all levels of our society, whether that means cutting veterans a break on their property taxes or expanding their access to career opportunities. No action is too big or small when we are thanking those who have sacrificed so much for us.”

“The veterans' property tax deduction is an extension of our state’s appreciation for our veterans,” said Senator Fred Madden. “These folks, whether they own their home or not, risked their lives for this country and while $250 may not seem like a large sum, when someone is in a retirement community, often living on a fixed income, every dollar counts.”

“Our veterans have done so much for us, it is simply the least we can do to give them the same assistance we give to current homeowners,” said Assemblyman Eric Houghtaling. “The goal of this law is to make a simple fix to offer all of our veterans the same benefit whether they own a home or live in a continuing care retirement community.”

“Many veterans are discharged and end up experiencing significant financial hardships,” said Assemblywoman Joann Downey. “This law will help veterans and their families by giving them just a little extra assistance to live in communities that can give them the care they not only need but deserve.”

“Extending property tax deductions and exemptions for veterans living in continuing care retirement communities is absolutely the right thing to do,” said Assemblyman Joe Danielsen. “Veterans have sacrificed for our country and we should thank them by helping them any way we can.”

“The benefit of this law is that it will help veterans secure rental housing,” said Assemblyman John Armato. “It is also beneficial to those military service members or veterans who are full-time students who often have limited or no income.”

“Our veterans have made so many sacrifices for our country,” said Assemblyman Vincent Mazzeo. “We should always look for ways to make their lives easier. They have earned and deserve such consideration.”

“Our nation and our state must continuously show our veterans that they are appreciated,” said Assemblywoman Carol Murphy. “This country is better, safer and freer because of our military. As a nation, we owe them a tremendous debt.”

“New Jersey has between 1,500 and 2,000 homeless veterans,” said Assemblyman John Armato, a U.S. Air Force veteran who served in the Philippines Islands and Korea. “These statistics are unacceptable, and this law looks to correct such disturbing figures by helping these veterans get the services that they need and deserve.”

“It is unconscionable that we allow veterans to be homeless considering the sacrifices they have made to safeguard our liberties,” said Assemblyman Raj Mukherji, a former Sergeant in the U.S. Marine Corps. “In many instances, the stress and frustration that veterans experience are related to a lack of services or awareness that they exist. By helping more veterans income-qualify for rental housing, this law will help eliminate a few more roadblocks in their lives.”

“Sadly, our veterans comprise some of the highest rates of unemployment, homelessness and suicide in our communities,” said Assemblyman Joe Danielsen, who served in the U.S. Army Reserves’ 78th Division here in New Jersey and comes from a long line of veterans in his family. “We must continue looking for ways to better serve our veterans, and this legislation is a step in the right direction.”

“Those who have put their life on the line to protect our country should be provided with legal representation when they’re at risk of losing their home,” said Senator Sandra Cunningham. “Veterans deserve an advocate when it relates to their well-being, their safety or the security of their family.”

“The veterans' property tax deduction is an extension of our state’s appreciation for our veterans,” said Senator Fred Madden. “These folks, whether they own their home or not, risked their lives for this country and while $250 may not seem like a large sum, when someone is in a retirement community, often living on a fixed income, every dollar counts.”

“This isn’t about giving them a free license, it’s giving them an opportunity,” said Assemblyman Parker Space. “More men and women who stepped up to serve our country can be their own boss, earn extra income and even grow their venture into a food truck or brick-and-mortar business.”
Regarding SJR 86:

“It is unacceptable to allow our veterans to go from serving our country to living on the streets when they come home,” said Senator Troy Singleton. “Our veterans sacrificed time away from their families, friends and work in defense of our freedom so we must do everything possible to assist them during difficult and trying times in their lives.  They deserve to be treated with dignity and should have the best services at their disposable.”

“Over the past 100 years, the American Legion has made a considerable mark on American culture," said Assemblyman John Armato. “From influencing social change to starting programs for youth to advocating for veterans, the Legion has changed the lives of so many people. I applaud the Legion for reaching this milestone, and look forward to seeing it grow for years to come.”

“What began as a small patriotic veteran’s organization has flourished into an over two million-strong nonprofit spanning all fifty states and the District of Columbia, Puerto Rico, France, Mexico and the Philippines,” said Assemblyman Vince Mazzeo. The patriots of the American Legion work tirelessly to serveveterans and make a positive impact in their communities, and their efforts should be celebrated today and every day.”

“The American Legion represents the very best of America; the people who’ve served their country bravely, and gone on to continue their service through community-based advocacy,” said Assemblyman Wayne DeAngelo.  “We salute the American Legion and all it has achieved for our entire nation.” 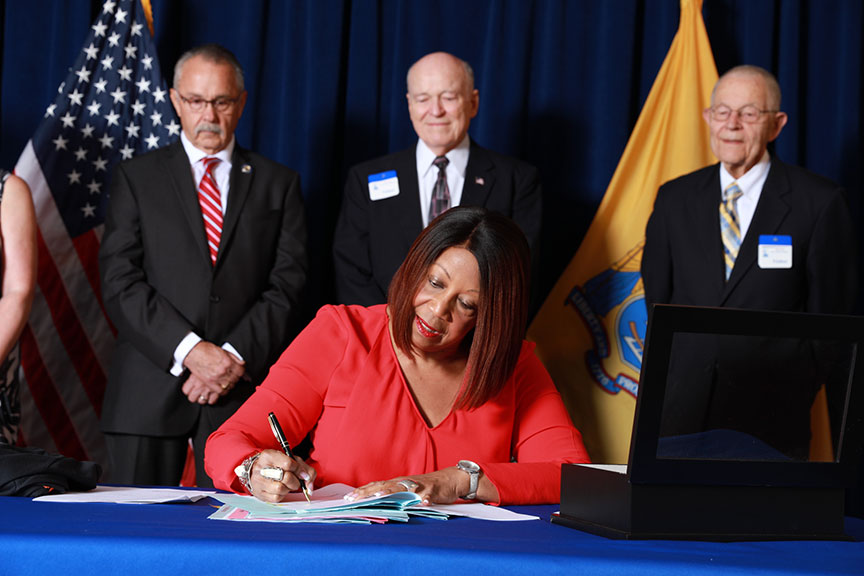