EATONTOWN – Governor Phil Murphy today announced a second round of state funding to create or expand preschool programs in 33 school districts – marking the first time those communities have received state aid for preschool. The $26.9 million in Preschool Education Expansion Aid (PEEA) ensures that 2,320 children will start 2019 in a high-quality preschool classroom.

“Expanding early childhood education is among the smartest investments we can make for the future of our state,” said Governor Phil Murphy. “Providing children with access to high-quality education is a vital component of building a stronger and fairer New Jersey where children and families can thrive.”

“A child’s earliest years are a critical time during which rapid brain development occurs. These milestones inform their cognition, health and behavior throughout life,” said Education Commissioner Lamont O. Repollet. “Expanding and investing in preschool education is vitally important for the development of childhood education. Early childhood education provides the readiness skills they need for their academic career and prepares them for challenges beyond the classroom.”

“Research shows that when children attend high-quality early childhood programs it results in greater lifelong academic and economic success,” said Senate Education Chair M. Teresa Ruiz. “I am energized and excited about the Governor’s announcement, as universal preschool has been a cornerstone of my public policy agenda. With every dollar we devote to early childhood education we are investing in the future of New Jersey.”

“I was pleased to see the Governor’s funding announcement for the Preschool Education Expansion Aid today,” said Senator Vin Gopal. “It’s clear that preschool provides a strong foundation for a child’s future academic and economic success. Therefore, expanding access to preschool in low income communities throughout the state will not only improve the lives of the youth enrolled, but it will strengthen all of New Jersey for the future. In the coming years, I hope we can do even more to improve our early childhood development programming.”

Governor Murphy announced the second round of PEEA funding during a visit today to the Woodmere Elementary School in Eatontown, which received $314,175 in state funding that allows 30 three- and four-year-old children from Eatontown to attend a high-quality preschool program.

Key elements of a high-quality preschool include limited class sizes of 15 children who are taught by a certified teacher and an aide; a transition to full-day programs; and inclusion of special-needs children with an individualized education program.

This second round of PEEA funding follows an announcement made by Governor Murphy in September 2018 that allocated $20.6 million in PEEA to expand existing preschool programs for more than 2,000 children in another 31 school districts.

Districts that were awarded round two PEEA funding include: 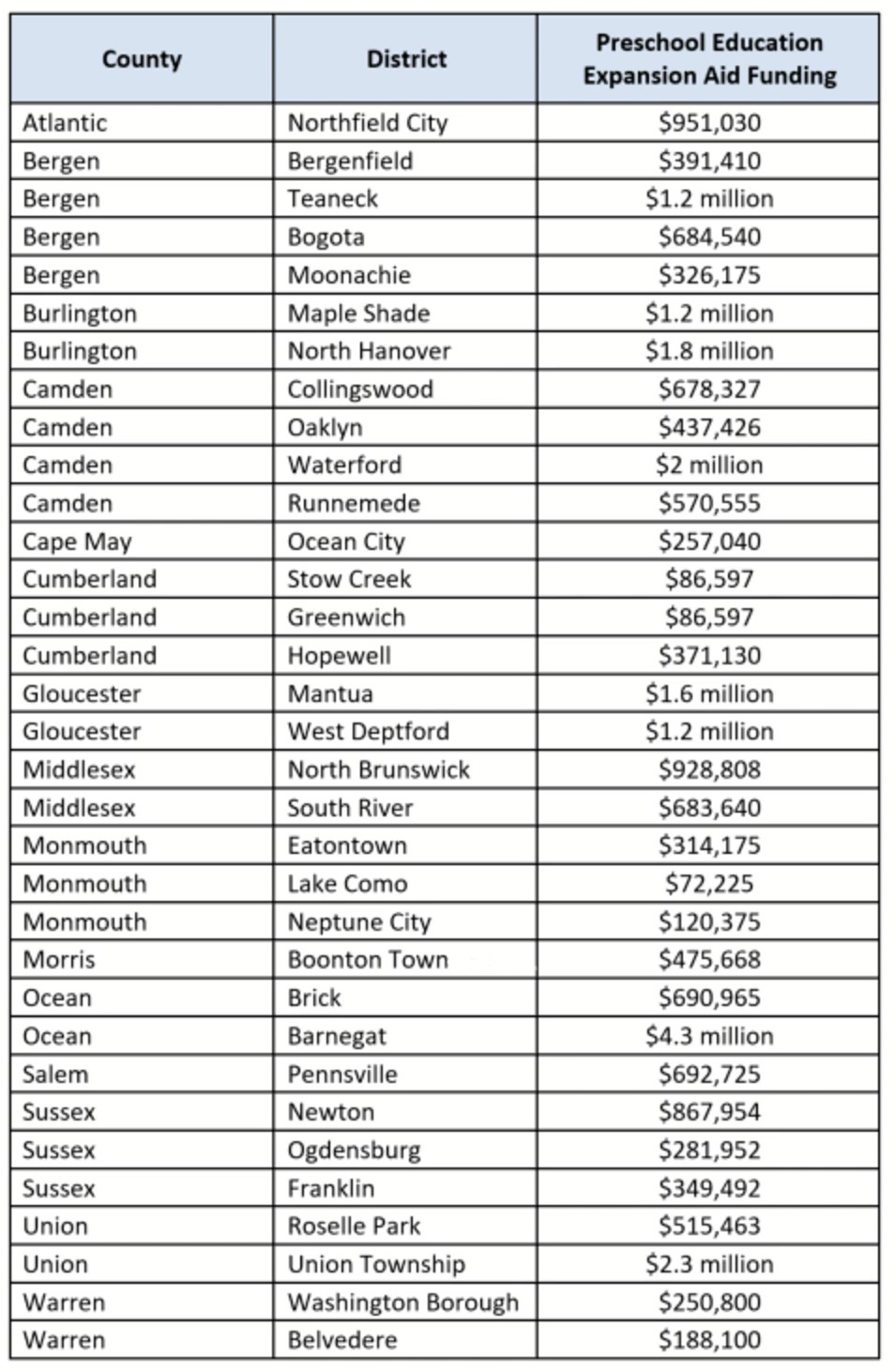