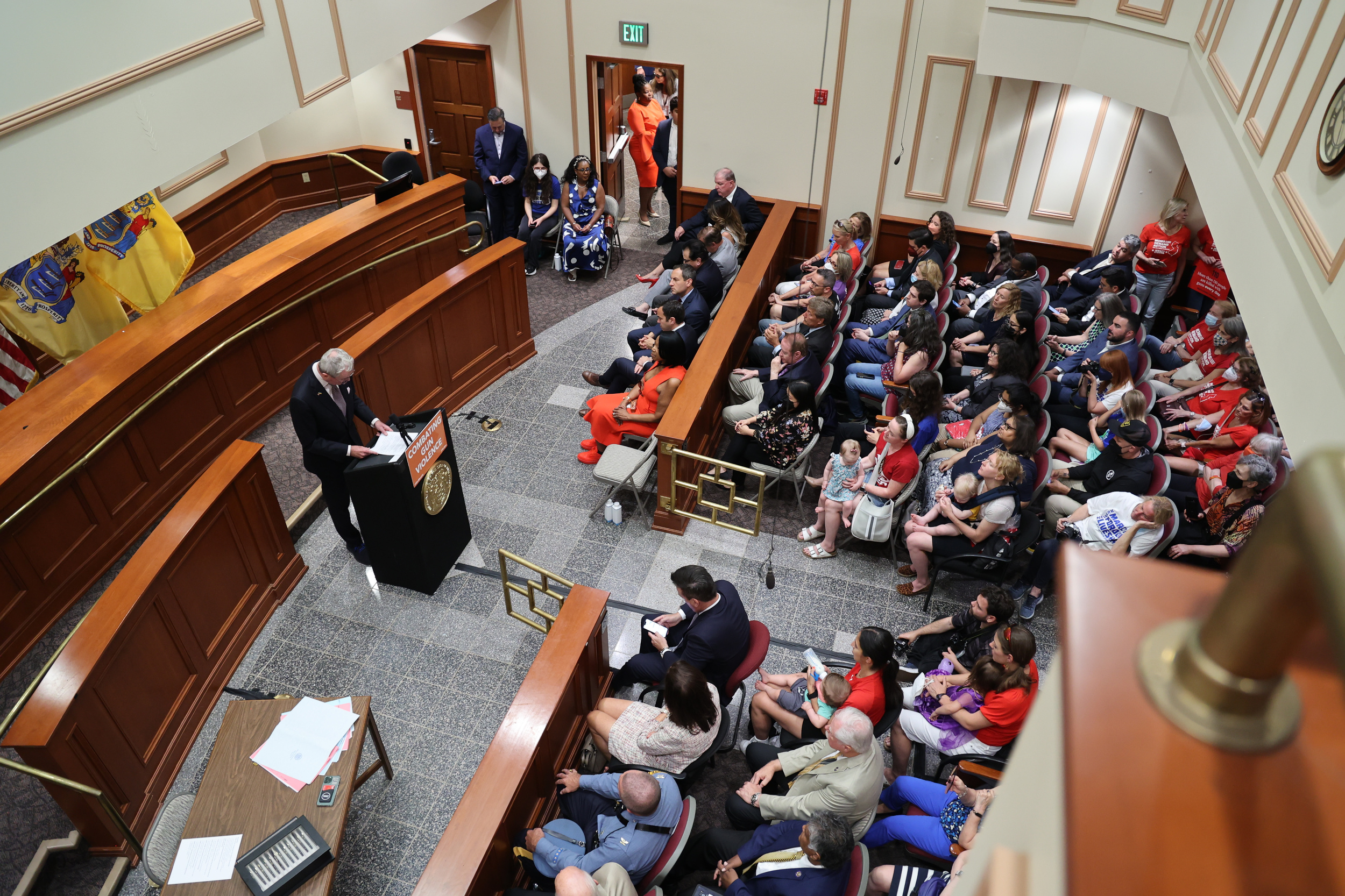 Governor Phil Murphy signed a sweeping series of gun safety reforms to continue the fight against gun violence in New Jersey. Since taking office in 2018, Governor Murphy has been a champion of bold, commonsense gun reform, and signed significant gun safety packages in June 2018 and July 2019. The Governor reaffirmed his commitment to reduce the epidemic of gun violence in New Jersey and signed seven comprehensive gun safety bills, six of which were part of his Gun Safety 3.0 package that he introduced to the Legislature in April 2021 and has repeatedly championed over the last year. These gun safety reforms further solidify New Jersey as a national leader in gun safety and deliver on the promise to make communities safer.

“In the wake of horrific mass shootings in Highland Park, Illinois, Uvalde Texas, and Buffalo, New York, it is necessary that we take action in order to protect our communities. I am proud to sign these bills today and thank my legislative partners for sending them to my desk,” said Governor Murphy. “As I have said before, this is a huge step forward for commonsense gun safety and for safer communities. But it cannot be our only or last step. I look forward to continuing to work with the Legislature and take action to make this state safer for all.”

"In New Jersey we understand what it takes to actually stop the vicious cycle of mass shootings and everyday gun violence in New Jersey. We do it by passing common sense gun safety laws that work," said Lt. Governor Sheila Oliver, who serves as Commissioner of the Department of Community Affairs. "We cannot continue repeating the sentiment that there is nothing that can be done to end this scourge of gun violence. There is and we owe it to the next generation to sign common sense gun safety laws that cut the problem off at the source." 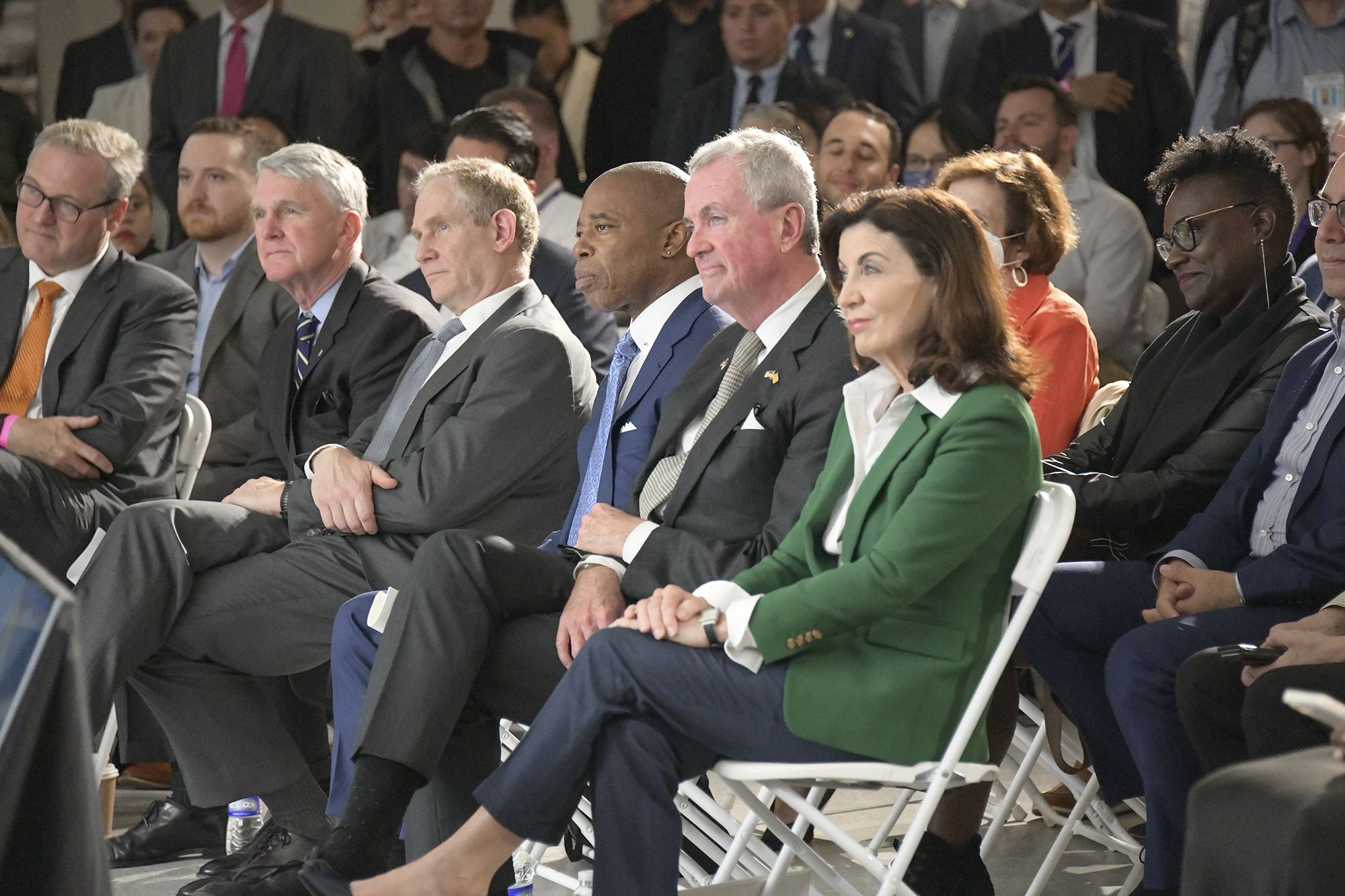 Governor Phil Murphy and Governor Kathy Hochul signed the Phase One Memorandum of Understanding required by the Gateway Development Commission Act along with Port Authority of New York and New Jersey (PANYNJ) Executive Director Rick Cotton. The MOU outlines sources, uses, and timing of funding on behalf of New Jersey and New York for Phase One Gateway Projects: Portal North Bridge and the Hudson Tunnel Project. Signing this MOU advances the Gateway Program to its next phase, which will detail the parties’ responsibilities with respect to delivery of the Hudson Tunnel Project and move forward in the federal project review.

Phase One of the Gateway Program is funded by a combination of federal and local sources. On behalf of the states, PANYNJ’s total commitment for Phase One is $2.7 billion. For Portal North Bridge, federal funding sources total approximately 60% of the total cost, leaving the States’ PNB Commitment of $772.4 million to be split by New Jersey and New York at $386.2 million per state. For the rest of the Hudson Tunnel Project, the States will similarly split the local share 50-50. The States intend to work with their partners and federal entities to aggressively pursue greater federal sources of funding for the Gateway Program through the Infrastructure Investment and Jobs Act.

“Today marks a pivotal milestone toward the completion of the most significant transportation project not just in New Jersey, but in the entire United States,” said Governor Murphy. “The Gateway Project reflects the importance of New Jersey’s regional partnerships and its alignment with the Biden administration’s infrastructure and transportation priorities. As we proceed with construction of a new tunnel under the Hudson River, we advance one step closer toward a New Jersey that is better connected and better positioned to reap the full economic benefits of our status as a regional crossroads. I thank Governor Hochul, as well as our Gateway Program partners, our respective federal and state delegations, and the U.S. Department of Transportation for their support in achieving this next great step.”

"The Gateway Hudson Tunnel Project is vital to the Northeast corridor, and today’s announcement is a critical step forward in turning this vision into reality,” Governor Hochul said. “By signing the Phase One Memorandum of Understanding, we are establishing the framework to get this project over the finish line and are making good on our promise to modernize the state’s transportation infrastructure and create a mass transit system worthy of New Yorkers. I thank my partner Governor Murphy, as well as our state and federal representatives, especially Senate Majority Leader Chuck Schumer and the Biden Administration, for their tireless efforts on this transformative project." 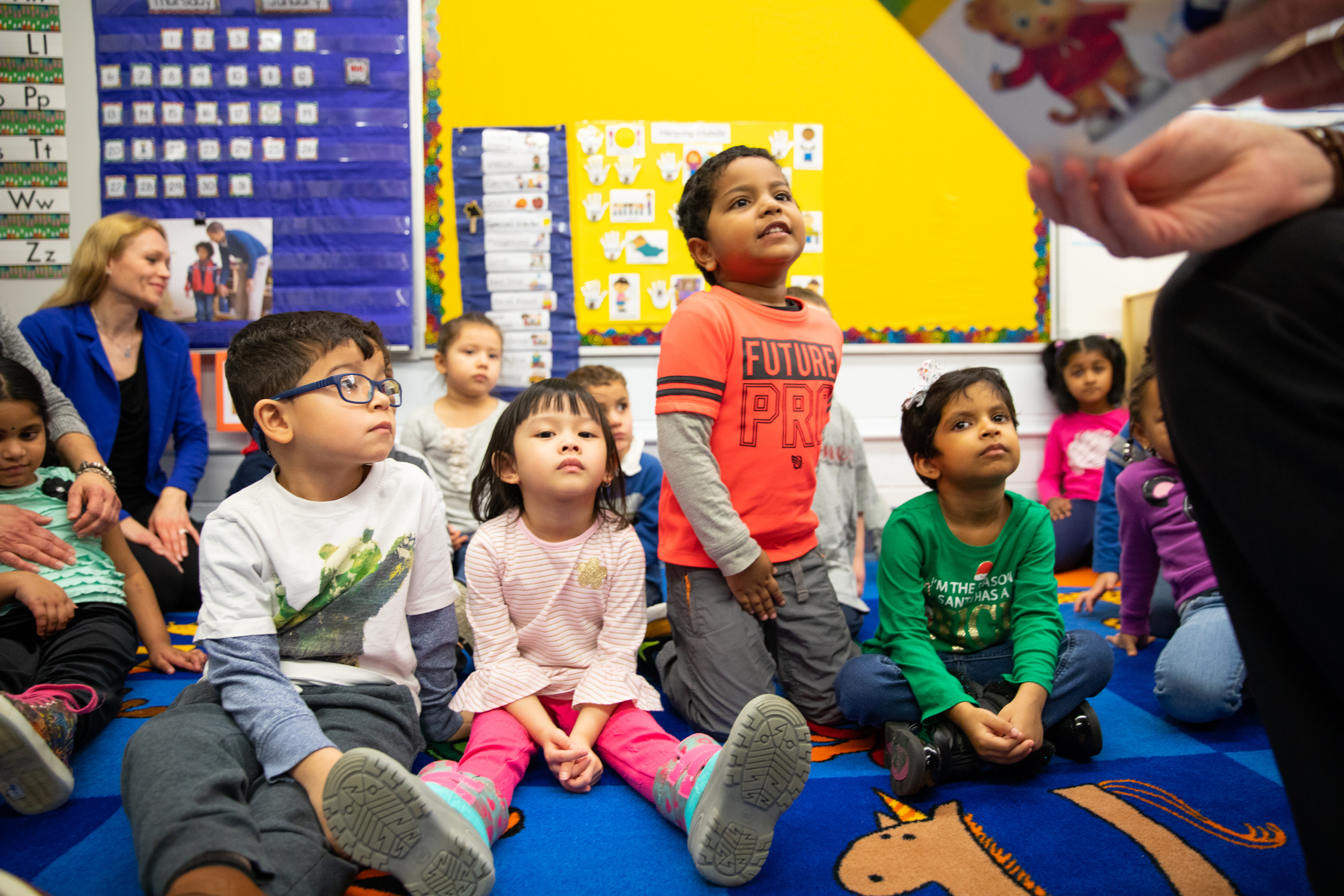 As part of the initiative toward universal preschool, the New Jersey Department of Education (NJDOE) invited school districts to apply for a share of $40 million in funding available to help districts expand or establish new high-quality preschool programs.  The NJDOE has now broadened the number of districts that can apply for funding from those that have 20 percent of their students are from lower-income families (as defined by being eligible for free or reduced priced lunch) to districts with 10 percent of students who meet the income eligibility standards.

After school districts apply to the notice of funding opportunity, the NJDOE is expected in September to notify the districts that have been approved for funding, allowing schools to implement their new high-quality preschool programs in October of this year.

“Expanding high-quality preschool to more and more communities has been a priority of Governor Murphy’s administration,” said Acting Governor Sheila Oliver, who serves as Commissioner of the Department of Community Affairs. “This funding is the latest step in a bold campaign to meet our vision of universal preschool for all of New Jersey.”

“This funding will substantially impact the lives of thousands of young children and their families this year and far into the future,” said Acting Education Commissioner Angelica Allen-McMillan. “Research has shown that children who attend New Jersey's high-quality preschool program have higher achievement from kindergarten through high school in language arts and literacy, math, and science. We are grateful for Governor Murphy’s continued investment to bring high-quality preschool to even more communities.” 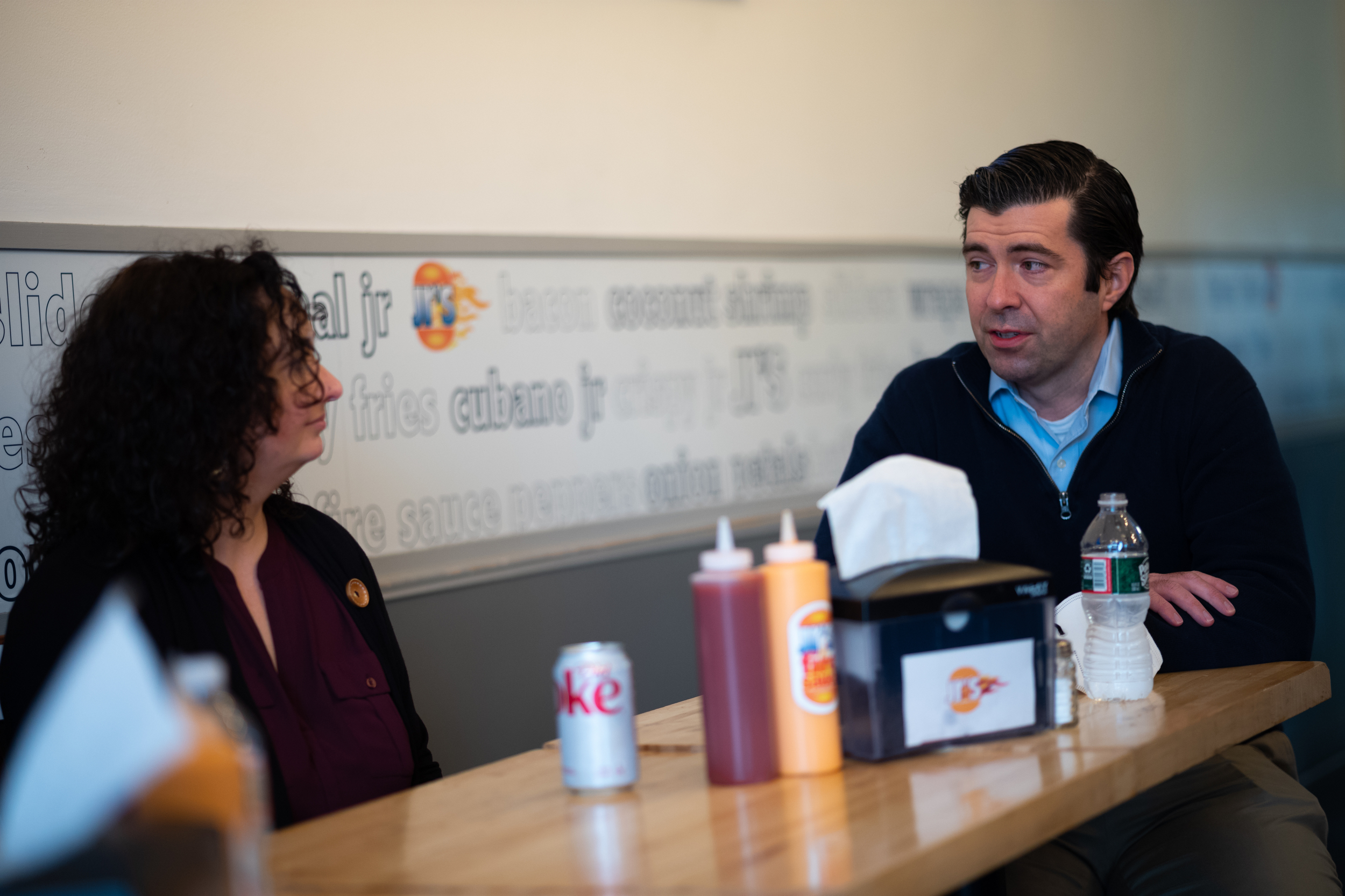 30 New Jersey Nonprofits to Receive $17.5 Million in Grants Through New Phase of NJEDA Program Supporting Restaurants and Families in Need

The New Jersey Economic Development Authority (NJEDA) announced plans to award grants totaling $17.5 million to 30 nonprofit organizations through Phase 3 of its successful Sustain & Serve NJ program. Sustain & Serve NJ provides eligible entities with grants to support the purchase of meals from New Jersey restaurants that have been negatively impacted by COVID-19 and the distribution of those meals at no cost to recipients. The additional $17.5 million in awards announced brings total program funding to $52.5 million.

Sustain & Serve NJ launched during the pandemic as a $2 million pilot program to boost restaurants impacted by COVID and has grown into an over $50 million program that continues to bring much-needed food to people across New Jersey. Since February 2021, Sustain & Serve NJ has already supported the purchase of more than 3.5 million meals from over 400 restaurants in all 21 counties with grants totaling $35 million.

Phase 3 of Sustain & Serve NJ is funded by $10 million allocated by Governor Phil Murphy from the federal American Rescue Plan and approximately $7.5 million in State funding. Funding from this latest phase is expected to support the purchase of an additional 1.5 million meals.

“Sustain & Serve NJ has become a national model for addressing food insecurity, supporting small businesses that are the heartbeat of our downtowns, and providing funding to the nonprofit entities that deliver vital services,” said Acting Governor Sheila Y. Oliver. “Combatting hunger remains a top priority and it is more critical than ever that nonprofits have the resources they need to feed the people within their communities.”

“Throughout the pandemic, Governor Murphy has challenged us to employ innovative methods for supporting businesses, nonprofits, and New Jerseyans in need and Sustain & Serve NJ has been a tremendous asset in helping us meet that goal,” said NJEDA Chief Executive Officer Tim Sullivan. “We have an obligation to aid our fellow New Jerseyans who face food insecurity every single day. Nonprofit organizations and restaurants are critical allies in that mission and supporting them is an important part of our commitment to eradicating hunger, creating jobs, and fueling the economic growth and security of our state.”