NJ Office of the State Comptroller

An Office of the State Comptroller (OSC) investigation has found that Mercer County incurred and paid nearly $4.5 million in penalties and interest for delinquent tax filings and payments between 2018 and 2021, resulting in waste that was paid by Mercer County taxpayers. During that time period, the Mercer County Finance Department (MCFD) consistently made insufficient and untimely payroll tax payments to the Internal Revenue Service (IRS) and the New Jersey Division of Taxation (Division of Taxation). For each delinquent filing, Mercer County was assessed penalties and interest that could have been avoided.

In the course of the investigation, OSC also discovered that the Chief Financial Officer (CFO) for the County lacked the statutorily required certificate to serve as CFO. OSC also found that MCFD’s operations contravene best practices for the management and operation of a public entity’s finance department, creating additional risk for fraud, waste, and abuse.

In order to avoid penalties and interest and to ensure that taxpayer funds are protected, OSC makes six recommendations to Mercer County at the conclusion of this report.

Mercer County operates under a county executive form of government with a Board of Commissioners serving as the County’s legislative body and a County Executive administering county operations.1 The Board consists of seven members elected to three-year staggered terms.2 The Board is responsible for (1) adopting the County’s Administrative Code; (2) passing ordinances and resolutions; (3) reviewing, modifying, and adopting all operating and capital budgets; (4) evaluating and studying the County’s annual budget before final approval; and (5) entering into contracts with municipalities in the county.3

New Jersey law requires every county to appoint a CFO who is responsible for the proper financial administration of the county.6 The CFO’s statutory duties include, among other things, (1) acting as custodian of all public funds; (2) developing a system of internal controls to protect assets and ensure proper accounting compliance; and (3) complying with IRS regulations regarding employee payroll and vendor payments.7 County CFOs are appointed for three-year terms and must hold a county finance officer certificate issued by the Division of Local Government Services (LGS), a division within the state Department of Community Affairs.8 Requirements to obtain a certificate include certain higher education requirements, experience as a county finance officer, and satisfactory completion of various training courses.9

The Mercer County CFO is appointed by the County Executive and serves as Treasurer and Director of the Finance Department. In addition to the CFO’s statutory duties, the Mercer County CFO is responsible for providing accounting records and preparing the county’s annual financial statements, preparing the annual budget, and providing for long-term capital financing for county entities. 10

Employers that do not pay the tax reported on their return by the due date are subject to a separate penalty, known as a “Failure to Pay Penalty.”15 This penalty continues until the delinquent tax is paid, up to a maximum of 25 percent of the unpaid tax. In addition to the failure to pay penalty, the IRS also charges interest on any unpaid payroll tax until the balance is paid in full.16

OSC’s investigation was initiated upon receipt of a confidential complaint in 2021. OSC is authorized to conduct investigations concerning alleged fraud, waste, abuse, or mismanagement of State funds, designed to provide increased accountability, integrity, and oversight of county and municipal governments. To conduct its investigation, OSC obtained and examined numerous documents, including IRS account transcripts for quarterly payroll tax returns for the period of 2018 to 2021.

OSC conducted interviews with multiple current and former employees of MCFD, as well as the Mercer County Administrator. OSC attempted to interview David Miller, the Mercer County CFO during the period under review, about the operations of MCFD and the issues identified in this report. Mr. Miller through his attorney represented to OSC that if interviewed he intended to exercise his right against self-incrimination under the Fifth Amendment to the United States Constitution.

OSC sent discussion drafts of this Report to Mercer County and Mr. Miller to provide them with an opportunity to comment on the facts and issues identified during this review. In preparing this Report, OSC considered the responses received and incorporated them where appropriate.

A. From  2018 to 2021, Mercer County Incurred Nearly $4.5 Million in Penalties and Interest for Late Payroll Tax Filings and Payments.

From July 2018 through March 2021, the County also incurred over $363,000 in interest charges and paid over $334,000 after an IRS abatement.  During that time, there was only one quarter in which the County was not charged interest due to late payments.  For that one quarter (the third quarter of 2019), the County overpaid its tax liability by more than $3 million. The IRS automatically applied part of that overpayment to the County’s prior delinquent taxes as far back as 2015 and refunded the remaining amount. 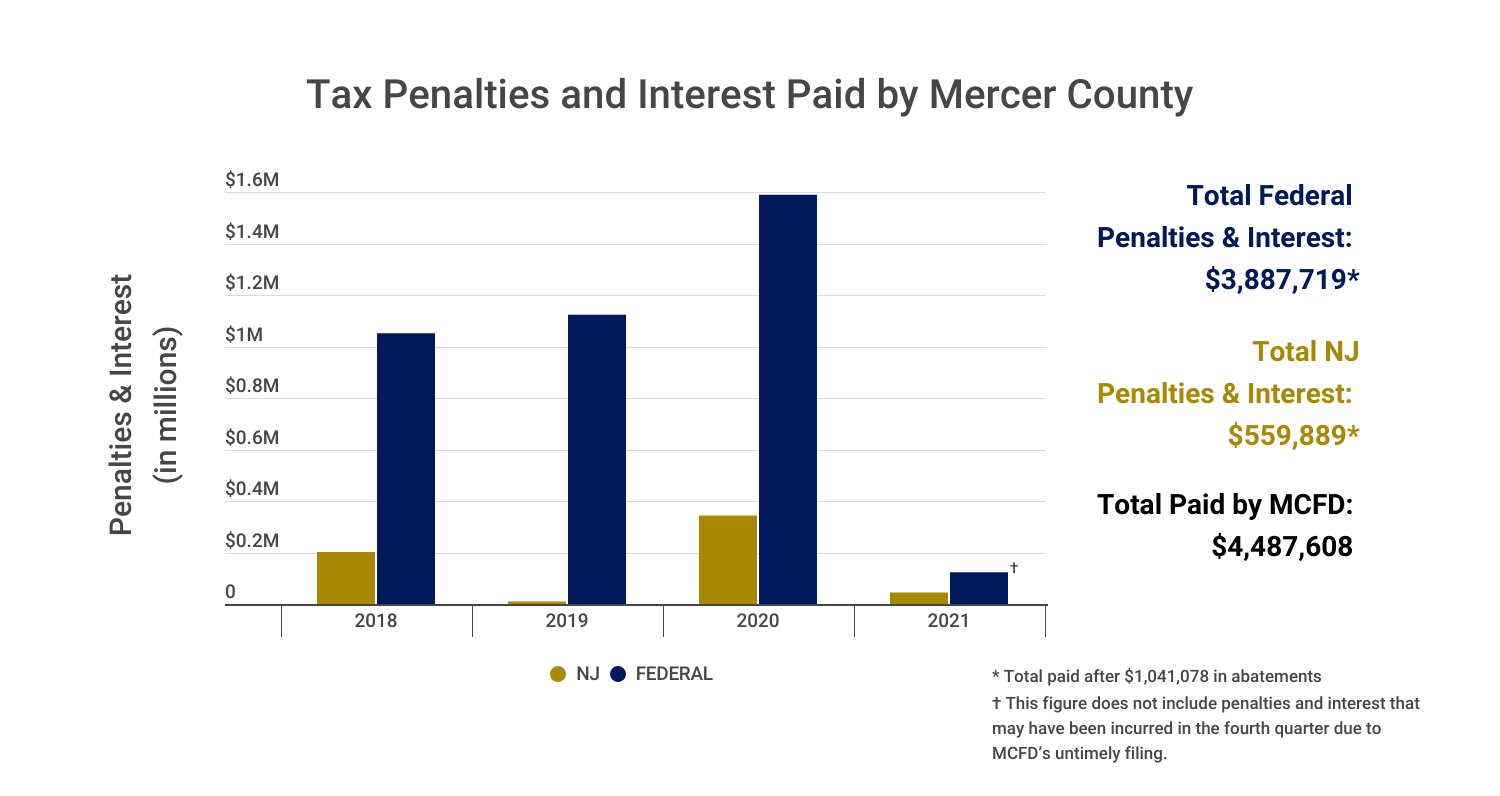 3. MCFD Did Not Maintain Any Written Policies and Procedures Governing the Filing and Payment of Payroll Taxes

OSC requested MCFD’s written policies and procedures governing the filing and payment of payroll taxes and was informed that MCFD did not maintain any. As a result, OSC obtained information about MCFD’s payroll tax processes through interviews with MCFD employees.

As part of the payroll process, MCFD’s accounting software generates paper checks for MCFD to pay its payroll taxes.  However, according to MCFD employees, Mr. Miller regularly instructed the payroll clerk to void these checks and, instead, submit the federal tax deposit through the IRS’s automated phone system. MCFD employees also reported that Mr. Miller would take the voided state payroll tax checks and wire the payments to the taxing authority himself.

MCFD employees could not identify a reason why the payroll tax deposits and returns were not timely filed. Rather, one witness reported that Mr. Miller described the penalties and interest as simply “the cost of doing business.” Further, despite several requests, the County did not provide a complete list of all its bank accounts, the names of the individuals who had access to the accounts, or documentation of how the penalties and interest were paid.

B. The County CFO Did Not Possess the Certificate Necessary to Serve in That Role.

By statute, an individual must hold a county finance officer certificate issued by LGS to serve as a County CFO.20 OSC’s investigation revealed that Mr. Miller did not hold, or even apply for, a county finance officer certificate during his entire tenure as Mercer County CFO.21 As a result, Mercer County was without a properly credentialed CFO for over a decade.

C. MCFD Failed to Follow Best Practices in the Operation of the Department and Was Inadequately Staffed.

Best practices for the management and operation of a public entity’s finance department include, among other things, reliance on a formal organizational chart; the use of written policies and procedures for each task performed by the department (e.g., the filing and payment of payroll taxes); the segregation of department duties; and thorough documentation of the responsibilities of each position within the department.22 Executive level employees should actively oversee the implementation of internal controls developed to ensure integrity in the management of public funds, monitor the performance of those controls, and work with a committee to oversee the department’s operations.23

OSC’s investigation found that the County and MCFD failed to follow these best practices, creating a risk for fraud, waste, and abuse. MCFD does not have an organizational chart clearly defining the department’s reporting structure, identifying the positions available within the department, and listing the current staff members. MCFD also does not have written policies and procedures establishing internal controls and the segregation of duties that provide checks and balances on employees involved in approving expenditures of public funds.

The County Administrator — the Mercer County representative responsible for overseeing MCFD — told OSC that she was unaware of any written policies or procedures guiding the operation of MCFD.  When asked specifically about policies governing the segregation of department duties, the County Administrator stated that an employee’s formal job title and the duties assigned to that title ensure department duties are effectively segregated.  When questioned further, however, she acknowledged that the formal job titles and duties do not necessarily correspond to the work MCFD employees perform or ensure the segregation of duties. Further, although the County Administrator stated that she held monthly meetings with all department heads, she provided Mr. Miller with substantial discretion with regard to his administration and operation of MCFD with no direct oversight of the department’s day-to-day operations.

In its response to a draft of this report, the County asserted that Mr. Miller was responsible for the daily operations of the Finance Department and was expected to bring issues of concern to the attention of the County Administrator.  Any discretion provided to department leaders over the daily operations of their respective departments, however, does not relieve county management of the duty to proactively ensure that county departments are operating efficiently, preventing waste, and adhering to best practices.

Additionally, annual independent audits of the County repeatedly noted issues regarding a lack of adequate staffing within MCFD. The auditor noted that inadequate staffing levels resulted in untimely reconciliations and untimely compliance with audit requirements. At least twice, the external auditor discussed with the current and former County Administrators a need for additional staff in the finance department to ensure the County remained current with its audit requirements. The auditor stated that the annual audits were consistently delayed because the County did not provide the necessary documentation in a timely manner. In 2019, the external auditor recommended that the County hire a Deputy CFO.

In its response, the County stated the County Administrator was made aware in 2019 that the independent auditor recommended that MCFD hire additional staff.  The County also claimed that it took steps to hire one additional staff member, a Deputy CFO, at that time. The County, however, did not actually hire a Deputy CFO until May 2022, almost three years after receiving the recommendation from the independent auditor.  The County reported that the delay in hiring a Deputy CFO from 2019 to 2022 was due to the COVID-19 pandemic.

Based upon the facts uncovered in its investigation, OSC makes the following six recommendations intended to promote more efficient government. In its response to OSC’s draft report, the County agreed to implement OSC’s recommendations, and indicated the County has already formed a Finance Committee to oversee the operations of MCFD.

[21]              On August 17, 2022, Mercer County informed OSC that Mr. Miller was placed on administrative leave without pay for his failure to possess and maintain the credentials necessary to serve as a county CFO.