ASBURY PARK – The Renaissance at Asbury Park, a new development of 64 apartments affordable to working families and retail space in the Springwood Avenue neighborhood, celebrated its grand opening today as a key part of the area’s continued redevelopment. The event was attended by New Jersey Housing and Mortgage Finance Agency (NJHMFA) Executive Director Charles A. Richman, local officials and representatives of The Michaels Organization.

The $20.2 million development, financed in part by Superstorm Sandy recovery funds provided by NJHMFA and the Department of Community Affairs (DCA), includes 32 apartments in a four-story building and four townhouse buildings each containing eight apartments. The development is targeted to households earning less than 60 percent of the area median income (AMI). Five apartments are providing homes for homeless individuals and families, with a preference for homeless veterans.

“This beautiful new seaside apartment complex is aptly named Renaissance because it serves as a catalyst for reviving a once thriving part of Asbury Park,” said Lt. Governor Sheila Oliver, who also serves as DCA Commissioner and chair of the NJHMFA board. “Bringing the needed housing, services, retail stores and people back to this neighborhood will be beneficial for the entire community. The Murphy Administration, DCA, and NJHMFA are once again proud to be partners in the ongoing revitalization efforts at the shore.”

Residents have begun moving in, and the apartments are nearly fully occupied. The development included about 1,200 square feet of retail space, which is not yet rented.

The Renaissance was built on three vacant adjacent parcels on Springwood Avenue and is part of the corridor’s ongoing redevelopment. The Springwood Avenue corridor was a once vibrant west side neighborhood with retail and other establishments that served the community, and in particular, was an area rich in music history, noted for jazz and rhythm and blues clubs and music. In 2016, the Springwood Avenue Park opened across from The Renaissance, and a ribbon-cutting ceremony in March marked the opening of nearby Boston Way Village, which also was financed by NJHMFA.

“Asbury Park has seen a tremendous revival, and that redevelopment is now taking hold on the city’s west side,” said NJHMFA Executive Director Richman. “The Renaissance at Asbury Park is an integral part of the ongoing
redevelopment in the Springwood Avenue corridor and brings affordable housing opportunities to working families, which will help to rebuild this community, as well as retail space that will generate jobs and help boost the local economy.”

NJHMFA provided $10.5 million in construction and permanent loan financing, as well as $8.9 million in federal Community Development Block Grant Disaster Recovery assistance through the Fund for Restoration of Multifamily Housing (FRM). The FRM program, created following Superstorm Sandy, provides for-profit and nonprofit housing developers an opportunity to secure zero-interest and low-interest loans to finance the development of affordable housing in the nine counties most impacted by the storm.

To date, 76 projects have included FRM funding to create nearly 6,050 rental housing opportunities, 90 percent of which are affordable to low- and moderate-income households. Since 2012, 17 projects with over 1,400 affordable apartments have been created in Monmouth County.

Rents on the one-, two- and three-bedroom apartments range from $313 to $1,445, depending on income. The development is close to the Asbury Park Transportation Center, a transportation hub for both buses and rail. The Renaissance is also within a mile of Asbury Park’s beach front, and close to retail shopping and restaurants.

The Michaels Organization, based in Camden, offers full-service capabilities in development, property management, construction, and finance.

For more information on NJHMFA and its programs, visit njhousing.gov. 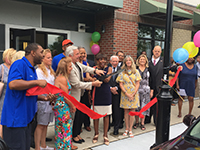