The Stage Band, known as The Blue Winds, is a large jazz ensemble which performs music in a variety of jazz styles, from traditional swing charts, to disco classics, to more contemporary arrangements of popular music. The Jazz Band performs alongside the Concert Band during the summer concert series and also does stand-alone jobs at ballroom type events.

The Marching Band is a popular participant in area parades and military ceremonies. This ensemble performs for outdoor ceremonial functions such as change of command ceremonies, military retirement ceremonies, the Governor’s inauguration, and parades. Local civil organizations often invite the band to perform, providing excitement and patriotic flare that only a military band can display.

The 63rd Army Band Jazz Combo is a small group that performs jazz standards at small events such a cocktail hours and formal functions. It is comprised of a saxophone, piano, bass, and drums.

The Brass Quintet, known as Just Brass, No Ammo, is made of dedicated brass players committed to performing exciting music. This versatile group covers a wide range of music from traditional marches to arrangements from The Beatles. We are available to both military and civilian ceremonies and concerts. 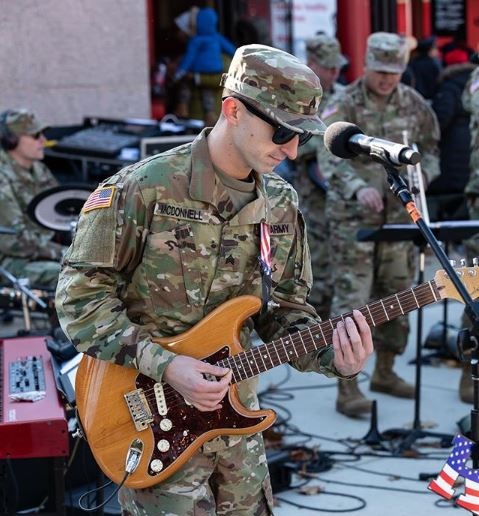