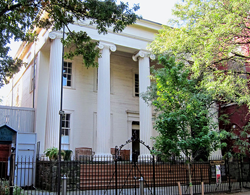 Also known as the Ionic House, this building was constructed in 1835 by Cornelius Van Vorst for Dr. William Barrow and is a superb example of Greek Revival residential architecture. In the late 19th century, when occupied by the YMCA, a bowling alley and gymnasium were added. Used by neighboring St. Mathews Evangelical Lutheran Church for most of the 20th century, the church founded a community development corporation to be the steward of the building, which is now used by many community groups.