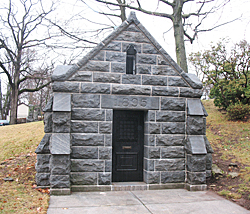 The original five-acre cemetery was given to the Presbyterian Society of Bloomfield by Isaac Bell in 1796. Additional acreage was later added and by 1882 the cemetery consisted of thirty acres. In 1853 the cemetery was taken over by the Bloomfield Cemetery Company. Noted American architect Alexander Jackson Davis provided a picturesque Victorian plan for the cemetery as well as a gatehouse during the third quarter of the 19th century. Many notable people are buried in Bloomfield Cemetery including two New Jersey governors, Ephraim Morris of the Morris Canal, and architect A. J. Davis among many others. The receiving vault was constructed in 1895 to hold caskets until the ground was able to be dug. The structure is threatened due to the failure of the original iron support structure and deteriorated slate roof.

The Trust grant would help fund the restoration of the cemetery’s receiving vault including replacing the slate roof, rebuilding and stabilizing the stone façade and roof, and restoring the iron door.