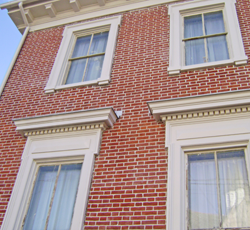 Constructed in 1816 as the Cumberland National Bank, the institution was the first bank in New Jersey located south of Camden and was founded to support the Cumberland Iron and Nail Works, an important local  manufacturer throughout the 19th century. After the bank moved out, the Bridgeton Library purchased the structure in 1901 and the city acquired it in 1922.  In 1967, a new substantial library was constructed adjacent to the historic bank building, which is now used for library offices and meetings but is not generally open to the public.

The 2010 capital grant helped fund exterior repairs to masonry, windows, and cornice.  These work items are priorities identified in the preservation plan funded by the 2009 grant.