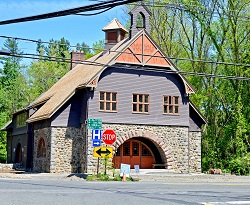 The Darlington Schoolhouse was designed by noted Newport, Rhode Island architect Dudley Newton. The 1891 construction of the building was financed by businessmen Theodore A. Havemeyer and Alfred B. Darling. The unique building is an example of the wealth brought into the Mahwah area by New York City industrialists during the last quarter of the nineteenth century. The structure incorporates features of the Richardsonian Romanesque, the Stick Style, and the Shingle Style. The school closed in 1944. Following a number of ownership changes the building had been vacant for 20 years.