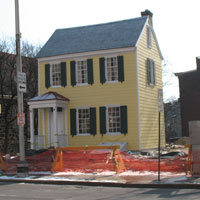 The Douglass House is significant for its association with General Washington’s war council after the second battle of Trenton, and also for its role in the Colonial Revival movement as an architectural relic of the Revolutionary War. It has been moved three times, most recently in 1972 to its current location.

The cast and wrought iron Jackson Street Bridge is a Pratt Truss design constructed in 1888 by the NJ Steel and Iron Company in Trenton. The two different resources are part of Mill Hill Park, a green oasis in urban Trenton.

The 2017 Trust grant helped fund the restoration, recoating and resurfacing of the Jackson Street Bridge. The 2008 Trust grant helped fund the interior rehabilitation of the Douglass House for use as a visitor center, as well as the repair and recoating of the bridge. Additional work in the park will include accessibility improvements and installation of interpretive signage that will discuss three centuries of the city’s history.