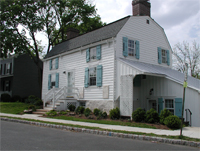 The construction date for Fleming Castle has long been stated as ca. 1756. Recent research conducted as part of a Trust-funded preservation plan has shown that while the structure probably dates to the eighteenth century, it may not have been as early as first noted nor used as a tavern by Samuel Fleming as long interpreted.

The preservation plan asserts that the house has gained additional significance as an example of early Colonial Revival-inspired restoration dating to the 1920s when a chapter of the Daughters of the American Revolution (DAR) extensively “restored” the building. The DAR owned the building until 2005 when it was purchased by the Borough of Flemington. Today, a friends group runs educational programming at the site.