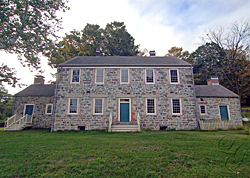 The Ford-Faesch House was built in 1768 by Colonel Jacob Ford, builder of the Ford Mansion in Morristown, also known as Washington's Headquarters. In 1772 Ford leased the house and its associated ironworks to Swiss emigre John Jacob Faesch. Under the direction of Faesch, the ironworks supplied ammunition and ordnance to the Continental Army during the Revolutionary War.

When purchased by Rockaway Township in 1982, the house was in an advanced state of deterioration. The Historical Society of Rockaway Township, which leases the house from the Township, has been responsible for the ongoing management and restoration of the house. The society has already addressed the most critical needs of the house: replacement of the roof and temporary shoring of water-damaged structural members. The Ford-Faesch House is opened throughout the year for events and programs.