Fighting for Freedom in Gloucester County 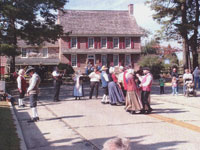 The grant helped fund the research, preparation and marketing of a themed audio tour on Gloucester County sites that are associated with the Revolutionary War. The tour materials are available as pod casts and maps that can be downloaded.

Among the sites included on the tours are Red Bank Battlefield, a 44-acre county park where the outnumbered Colonial Army in October 1777 defeated the Hessians, and the Quaker-owned Whitall House that was used as a hospital after the fighting. The nearby Otto House was home to the first surgeon general in the Colonial Army. Also on the tour is Woodbury Friends Meeting house, a 1715 structure that was used by both Colonial and English forces at different times during the war. Finally, the pastor at Trinity Old Swedes Church in Swedesboro documented the Gloucester County experience during the War in his personal diary.