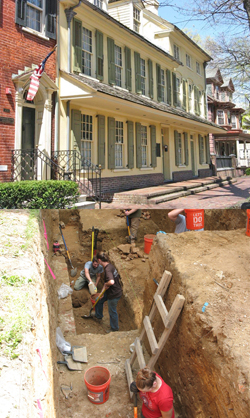 Brewer Timothy Matlack constructed a frame house here about 1732. In 1741, he added a three-story brick structure, with a kitchen wing and a paved cellar. Merchant Matthias Aspden added a brick extension ca. 1764. During 1777, the New Jersey legislature met in the 1741 section. While the legislature was meeting there, Hugh Creighton purchased the buildings and converted them to a tavern.

In the 19th century Aspden’s addition became a store, the “Ark” (it was removed in 1909). The frame brewery building was rebuilt in brick in 1811 and raised to three stories in the 1880s. The hotel was purchased by the state in 1903 and became the first property preserved as a museum by New Jersey. The building’s appearance dates to its 1909 restoration, as part of the Colonial Revival movement. The building was documented by HABS in 1934. For most of the 20th century, it served as the club house for groups associated with the American Revolution. In the 1980s, the building became a museum.

The 2012 grant helped fund a public archeology program to explore the site of the wing that was removed in 1909 and further investigation into the chronology of the building's construction. The information generated by these projects will help determine the potential for this site to be a Gateway Center within the Crossroads National Historic Heritage Area.

The 2009 grant helped fund the preparation of a comprehensive preservation plan that pulls together all previous documentation and studies and makes recommendations for future repairs, preservation, and use of the structure as a historic site.