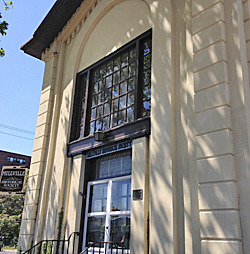 With simple Italianate features, the building was constructed in 1857 to house Millville's first bank. The building functioned as a bank until 1908, when it was renovated in a Colonial Revival style and became the city library until 1963 when it was used for city offices. Since 1977, the structure has been home to the Millville Historical Society's headquarters, exhibits, and collections.

The 2010 Trust grant helped fund structural repairs, roof replacement, and stucco repairs. These work items are priorities identified in the preservation plan funded by the 2008 grant.