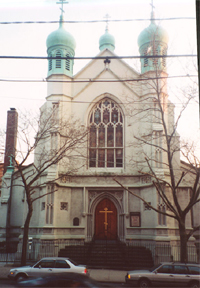 Located at the center of Jersey City’s Paulus Hook historic district and convenient to Ellis Island and Liberty State Park, Saints Peter and Paul Orthodox Church is a rare historical document and architectural expression of immigration and cultural assimilation. Originally constructed of brown sandstone in 1853 as a Dutch Reformed church in the Gothic Revival mode, the church was remodeled with onion dome cupolas, Greek crosses, brown sandstone stucco, and an interior program of painted icons in 1924 by its Russian Orthodox congregation, who purchased the building in 1907. The church survives today with an unusual degree of architectural integrity.

The 2004 and 2006 Trust grants helped fund on-going work to repair of the building's stone and stucco exterior. The work is the second of a three-phase $1.1 million project that will restore the building to its 1924 appearance. The first Trust grant helped fund the in-kind replacement of copper roofs.