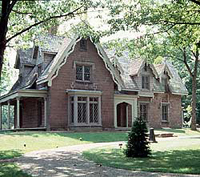 The Hermitage is an outstanding example of a mid-nineteenth century Tudor Gothic cottage villa, remodeled by architect William H. Ranlett in 1847-48. It also incorporates some of the walls and architectural fragments of a mid-eighteenth century house that was owned by American statesman Aaron Burr. The house is furnished to reflect the late Victorian era during the 163-year occupancy of the Rosencrantz family from 1807 to 1970. A landscape plan developed when the house was remodeled compliments the villa's irregular, naturalistic and romantic appearance, but the full plan was never executed. The Hermitage provides educational programs to more than 13,500 visitors annually.

The 2001 grant helped fund the preparation of a script for an interpretive video that would make the site more accessible to hearing or physically impaired visitors. The 1990 Trust grant funded the restoration of the gardens to their 1887 appearance.