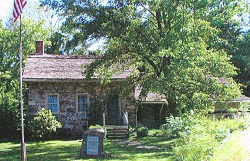 The Henry Van Allen House is a stone, Dutch colonial farmhouse built in the mid-18th century that was substantially altered in the early 20th century by millionaire businessman Edward Day Page. The Vygeborg Farm Office Building, also known as the Stream House, was constructed in 1902 to serve Page’s extensive agricultural operation. The basement of the building served as a creamery, while the upper floor housed farm office space. The building was constructed in the Dutch Colonial-Revival style, in keeping with the style of the Van Allen House. A unique aspect of the building is that a local stream runs directly beneath the building through a stone arched passageway built into the foundation. A shed and the foundations of the former greenhouses are also still standing.