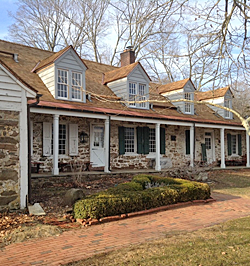 The Van Riper-Hopper House is significant as a Dutch Colonial stone house on its original site; it has served as a museum since 1964. Also on the site is the Van Duyne House, named for its owner, Minister Peter Van Duyne, and constructed pre-Revolution. The house was moved to this location in 1974. The park property, which is open to the public on a daily basis, also contains a smokehouse that is now used as an archaeology lab.